Click here to see what our athletes are saying about the Energy Link Coaching team.

One of Australia's best ever long distance Triathletes. Bruce is a 4 time Australian Ultra Distance Triathlon Champion and 7th place finisher at the World Ironman Championships in Hawaii. Bruce has raced extensively in Australia and Internationally, representing Australia in the Elite Division at World Long Course Championships and at the Hawaii Ironman. Bruce is a qualified Teacher, and coaches, mentors and motivates some of Australia’s most promising future prospects in the sport of triathlon. Bruce is married to Christina and a father of three.

Mother of three and Level 2 Triathlon coach and former Australian Champion. Christina has been competing for 20 years and has been coaching and mentoring athletes for14 years and understands the requirements to train and race effectively. As a coach Christina's experience is widely regarded for excellent mentoring and communication. She understands the importance of mental preparation in training and racing and strives to keep a balanced and healthy approach to achieving goals. Christina knows what it takes to be successful in your professional life, remain focused on family times and to be out there achieving personal goals and enjoys the challenge of coaching individuals. 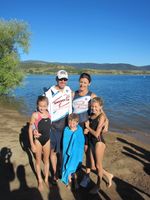 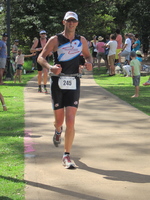 Lew is an active age group triathlete who has been training and competing with the Energy Link team for many years. During this time Lew has competed in 12 Ironman triathlons and has managed to bring his Ironman time down from 12:40 to sub 11hrs in 2012. Lew understands how to take advantage of individual strengths and work on weakness. He is a motivating and strong leader and is proof that working hard and being determined pays off.  Lew is currently in his final term of studying the Certificate 1V in massage therapy and is a Systems Architect in the Banking and Financial sector.

Owain (Waino) comes from a running background running with International representation for Wales and Great Britain. He spent four years at The University of Tulsa, Oklahoma on athletics scholarship before training to become a teacher. After moving to Australia and transitioning to triathlon under the guidance of Bruce, he became an Ironman 70.3 World Age Group Champion.