What an awesome day at Port Macquarie. After a week of wet and miserable weather leading up to the race, Sunday dawned clear and fine. Conditions were great for spectators and, apart from a stiff southerly wind making the journey to Laurieton a bit of a challenge on the bike, the conditions were far better than expected for racing. The new course performed well and the bike looked to be an honest bike for most competitors with the 12metre drafting rule. The pro race was interesting with an impressive, lead from the start to the finish performance by Pete Jacobs and a strong display in the women’s race by Carolyn Steffen. As coaches we were very proud of the efforts of the Energy Link athletes on the day. We had all athletes finish the race and a majority of personal bests! Congratulations to Martin Lord and Ron Wilson who have both earnt places at the start line of the World Ironman Championships in Kona this year. Well-done team!

Tim Berkman: While we did not see much of Tim in the lead up to the race, we certainly saw plenty of him on race day and his commitment to his preparation was obvious in his performance. With a goal to break 10:30, he timed it to perfection coming in with a massive 9seconds to spare. On a tough day at the office, he can be well pleased with the result.

Nev Bradshaw: After making his Ironman debut at Port last year, Nev wanted to do more than just finish the race. He certainly did that, putting a very solid run together to take 40minutes off last year’s time. With a bit more strength on the bike, Nev will be a force to be reckoned with in his age group.

Evan Campbell: Evan’s preparation for this race was fabulous. He turned up to the start line looking fit and lean and with a hungry look in his eyes. He was pumped for a good race but found he just didn’t have the legs on the bike. To his credit, he hung tough and finished the race, albeit a little slower than he had wanted. It was a learning experience for Evan and he has taken some real positives from the event. Look out for Evan next year!

Lew Hartley: Lew works hard and smart for Ironman and each year manages to chip away at his personal best. This year was no different. Despite not having the bike ride that he would have liked, he constructed a solid run and ended up with a very solid finish. While he had some disruptions to his run preparation, he showed again that the Ironman run comes down to a strong mental approach and showing the run the respect it deserves. If you want to know how to master the mind at Ironman talk to Lew. Well-done Lew.

Duncan Johnston: Those of you who met Duncan on the training weekend would have been impressed with his cycling strength. He put us all to shame on the hills out to West Head. We were expecting a solid bike from Duncan on race day, but the wind and a couple of other factors made it hard for him to get going on the bike. None-the-less, Duncan completed the bike and got through the run with a consistent performance. Duncan’s measured and objective approach to his racing and to Ironman is something we can all learn from.

Nathan Kivi: Nathan had a number of obstacles to overcome in the lead up to the race, not the least of which was having to compete on a loan bike as there were mechanical issues with his bike that the shop was unable to rectify prior to the race. It is testament to Nathan’s mental strength that his goal of breaking 12 hours was not only achieved, but obliterated as he went on to take essentially an hour off last year’s time. The sight of him charging along the break-wall on his final lap is an image that will stay with us for a long time.

Martin Lord: Martin debuted at Ironman in Busselton last December. He has a very level-headed approach to the sport and was philosophical about his prospects coming into the race. He ended up posting a very solid performance in a very competitive age group and looked strong all day. His immediate training plans and athletic goals were turned on their head when he secured a slot to race in Hawaii in October. Congratulations Martin – we look forward to seeing you carve it up over there!

Natlaia Szpalinska: Natalia was very thorough in her preparation for Ironman. Apart from fastidiously completing all of the assigned training (well, almost all), she took the time to be fully prepared mentally for any possible situation come race day (to the point of having anti-diarrhea tablets in her transition kit!). Natalia always looked composed during the race and had a smile on her face whenever we saw her. She showed that you don’t have to be a fast runner, just consistent to post a good run split and her finish was, apparently, something to behold.

Nicole Ward: Nicole had prepared well for the race at Port and was in a good space to perform well. At the start of the swim she was in the pro-wave about 15m in front of the rest of the race. When the gun went the kayak marshalling the pros had not moved and Nic swam straight into the kayak. This caused some disruption to her swim. However, she drew on her experience and hard work and raced solidly and consistently and posted the second fastest run split to finish with an excellent 4th place in a tightly bunched finish.

Ron Wilson: Ron put in a solid race across the board and drew on his local knowledge to post a strong result. After many years of chasing a slot to go to Hawaii with some great performances but very little luck, Ron earned a spot to return to Hawaii again this year after finally racing there last year. We look forward to seeing how Ron utilizes his experience last year when he returns to tackle Kona in October. 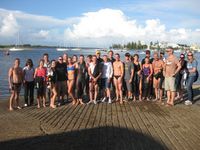